The Problem With Atheists These Days

Most Muslims are ok.  Most Christians are ok.  Most people, in general, are ok, including atheists.  But then you get the extremists and by this, I don't mean hairy little men running around donning the finest in tea-towel head equipment and high-yield explosive devices as their latest fashion accessories. Oh no, no.  I'm talking about the irrational passionates whose reaction dials are permanently set to 'knee-jerk'.  This is kind of like most microwave ovens which are never set to any power setting other than high.

Yes, I agree that Christianity has dominated Western culture for quite long enough and religious privilege is driving secularists such as myself up the wall.  Here in New Zealand, Christianity is still permitted to be taught in secular schools which in this day and age is quite absurd really.  In the long run, this needs to be addressed, but it's not - or rather should not at all be - a priority call (see my blog Abolishing Religious Instruction From New Zealand Secular Schools) as there are much more pressing issues at stake, such as religion having a direct influence on legislation.  The lesser issues and everything else?  Meh, we'll get around to dealing with them when we've got some spare time.  Well, at least that's how it should be anyway.

Unfortunately, we have individuals, groups, and organisations rallying together to speak up and fight the little things and believing quite incorrectly that the little things will lead to rectifying the greater issues.  Nope, not at all.  That's not how the church plays ball and whether you like it or not, the church is setting the rules and the knee-jerks are playing precisely the way the church anticipates them to play.  Not only are the knee-jerks ingorant of this fact, they DON'T WANT TO KNOW.  I guess it's a pride thing.  You know, we wouldn't want religious people to be smart and ahead of us now, would we?

So the problem with atheists these days, or more accurately, the outspoken anti-theist atheists, is that they react to anything and everything religious and have little or zero understanding of the battle they are fighting or whom they are fighting against.  They exhibit no tolerance at all and quite frankly, they are no different to religious fundamentalists who won't even so much as allow a lesbian to enter a bridal shop.  Yes, we need to separate religion and state because bigotry has no place in society and its governing legislation, but is witnessing a small thank-you prayer before a corporate meal or school exam really shoving religion down one's throat?  Is it something to lose our minds over?

The very psychology behind the closed mindedness that keeps people religious and irrational is the exact same psychology that causes the anti-theist to seek out and smack down anything and everything religious.  Or to put it more bluntly, to deny all religious people of any religious freedom whatsoever, regardless of whether it has any effect on those around them or not.

At the end of the day, being such an intolerant insolent because of a harmless superstitious tradition makes you look like a fool when you react so strongly to a practice that you insist you don't believe in. The people who do take public prayers seriously (a lot don't and only say these prayers to keep other traditionalists happy) will take one look at you and triumph at the fact that the power of prayer is demonstrably real by the manifestation of the evil within you trying to resist God's power. Not only that, but they will get up to tell everyone in Church how God is working through them because yet another non-believer has been defeated by the power of Jesus Christ through prayer. You think that sounds like utter tripe? Then get a grip and stop making the rest of us look like weak non-religious pansies. 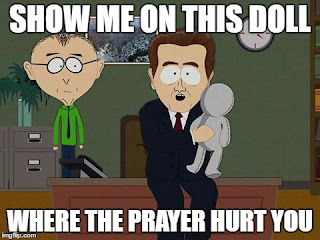 Posted by Mason Torrey at 03:16 No comments: